Precipitation is probably one of those topics that you learned in middle school English but have since forgotten. How does precipitation form? What exactly is it?

Precipitation is part of a water cycle which involves groundwater evaporating, condensing, and eventually precipitating. Here is a helpful graphic to visualize this: 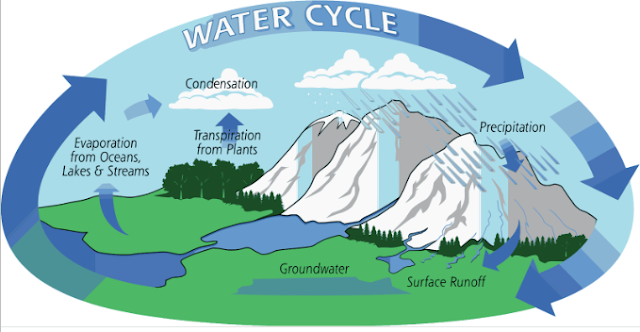 Here is a basic breakdown of what happens:

Plants transpirate water, which is a fancy way of saying they give off moisture. In addition, moisture evaporates from lakes, streams, oceans and other bodies of water. This moisture becomes water vapor - particles of water droplets - and rises into the atmosphere, where it begins to condense.

The condensed moisture, held in clouds, is transported by winds and pressure differences across land masses.

Different factors can induce the moisture to precipitate. Generally, a forcing mechanism (a catalyst) is needed to initiate precipitation; this can include a difference in pressure or temperature (frequently associated with an organized low pressure area, or a cold or warm front).

Sometimes the atmosphere at, for example, 12000 feet is moisture-laden and has a forcing mechanism generating precipitation. But at 8000 feet, it is quite dry (for whatever particular reason). This can block the precipitation from reaching the ground, though frequently, the dry layer tends to erode away and allow precipitation to reach the ground.

Once it precipitates, moisture runs off into creeks, streams, lakes, etc, and also seeps into the ground. These all end of evaporating moisture, and the process repeats.