Tsunamis: What Are They & How Do They Start?

Tsunamis are well known for their crashing waves that cause a big scare after an earthquake. But not all tsunamis come from earthquakes. How do tsunamis start?

Earthquakes are the leading cause of tsunamis, but 28% of tsunamis come from other causes.

The bottom line is that any large displacement of water from its normal placement can cause a tsunami. But here are a few ways they form:

The main cause of tsunamis is Subduction. As two plates converge, it creates a very strong tension. One plate will begin to bend downwards, while the second begins to get bent out of shape. This creates a strong friction and stores up a large amount of energy similar to that of a spring.

Use these images to help understand this concept. 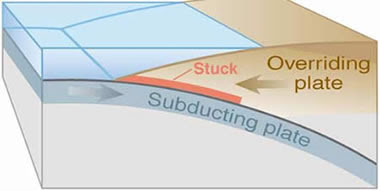 Eventually, the force of the overriding (upper) plate will be greater than the friction between the two colliding plates, which causes the overriding plate to snap upwards. At the same time, the land level gets dramatically lowered as the plate snaps into position.

This causes an enormous amount of water to shoot upwards, which sets off waves spreading in all directions. The water will naturally rush towards the lowered land levels.

These waves form what are known as a tsunami.

Landslides work in a similar way to an earthquake. A large mass of soil being dumped into an area of water crates a large wave as a result. These get pushed towards the shore that is left behind the landslide, thus creating a tsunami.

Volcanic eruptions and lava pouring into the ocean will do the same as a landslide.